While Norman knights may have been hired as mercenaries in Southern Italy from around 999-1046 CE, the more systematic invasion of Italy occurred in around 1046. The arrival of the Normans is recounted by William of Apulia in the epic tale of The Deeds of Robert Guiscaud.  William of Apulia was witness to conquest and was sympathetic to the Byzantine Greek forces who were holding the region when the Normans arrived.

News came to the rulers of the empire that the Normans, with Melus as their leader, were ravaging Apulia. On hearing this the court adjudged him to be an outlaw, and ordered that on capture he should be beheaded. The next year Basil, called Boiannes, was appointed Catepan, and sent out with a strong force of Greeks. He was a man valiant in war. We think that Catepan means, in Greek, 'before all'. Whoever holds that office among the Greeks acts as the people's governor, arranging everything and dealing 'before all' with each person as they deserve. 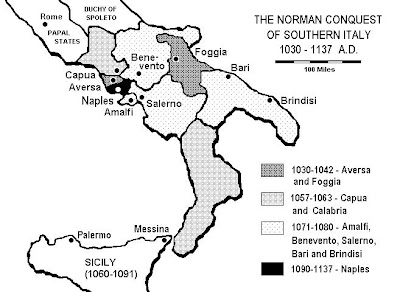 In 1053 a Norman army defeats the Papal army that was supported by German and Lombard troops and captures the German aristocratic Pope Leo IX at the Battle of Civitate.  Pope Leo IX was held hostage nearly until his death the following year. It was during this period of house arrest, that he issued a famous letter to to Michael Cærularius, Patriarch of Constantinople, in which Leo IX proclaimed the paramountcy of the Western Papacy or the Holy See based on what were faulty or forged documents known as The Donation of Constantine.  This led to the Great Schism of 1054 and the split between the Eastern Patriarchate into the Greek rite Byzantine church from the Western Roman church.

The account of the Battle of Civitate and the Pope's capture is related here by William of Apulia.

The result of the battle filled the pope with grief, and greatly lamenting he took refuge in the city. But the citizens did not receive him as was proper for they were afraid to displease the victorious Normans. The latter humbled themselves on bended knee before him, begging pardon. The pope received those prostrate before him kindly, and they all kissed his feet. He admonished them piously and blessed them, and lamenting greatly that he had spurned their offers of peace he prayed tearfully for his dead brothers.

....
Victory greatly raised the spirits of the Normans. Now no Apulian city remained in rebellion against them. All submitted and paid tribute. Count Humphrey then took revenge for the murder of his brother. He savagely punished all those who had been involved; he mutilated some, put others to the sword, and hanged many. Remembering Drogo's death he refused to grant mercy to anyone. The deep and burning grief which had descended upon him with his brother's murder remained strong, to the detriment of all. He subdued many cities. ....

For much of the next century the papacy comes under control of the Normans, and we find popes and antipopes who either French, in favor of the Normans installed.  It was during this period that we also find the only English pope in history, Adrian IV (1150-1159), who influenced the English king Henry II to invade Ireland.  The subsequent invasion and partial conquest of Southern Italy by Norman invaders is related in the captivating account of The Deeds of Robert Guiscard by William of Apulia.

Late 11th century Norman expansion into the Arab held areas of Southern Italy and Sicily afforded the Abbot Desiderius to begin new church building on a grand scale that later influenced cathedral building at Cluny in France.  Among Desiderius' projects was the Cathedral at Salerno (Duomo di Salerno) that combined features of Arabic and Norman architecture. Desiderius is an important figure in Italy during this period, for represents a conciliatory figure between the clergy in Italy and the Normans.  His election to the Papacy  as Victor II reflected the need for a Southern Italian pope.  His papacy only lasted a short time, 1086-1087.
Desiderius' promotion to the papacy as Pope Victor II was at the whim and favor of the new Norman occupiers of Italy and Sicily, who also supported his successor Pope Urban II proclamation of the First Crusade from the pulpit at Clermont on Nov. 27, 1095.  Perhaps no structure reflects the complicity of the Norman conquest of Arab Sicily than the new cathedral at Monreale, near Palermo.  It was built at the bequest of the Norman king, William II (r. 1165-89) who reputedly spoke Arabic (See Platt, p. 9, citing Ibn Jubayr).  The cathedral's integration of Romanesque ground plan, with Greek or Byzantine mosaic designs and interior elements of Arabic Islamic influence attest to the fusions of styles that raise questions for art historians about the choice to conduct an empire as mere conquest or as assimilation of elites to local conditions and populations.  Further, William II's marriage to Joana of England suggested the Norman need to consolidate their widespread holdings that had only been occupied within the past century. 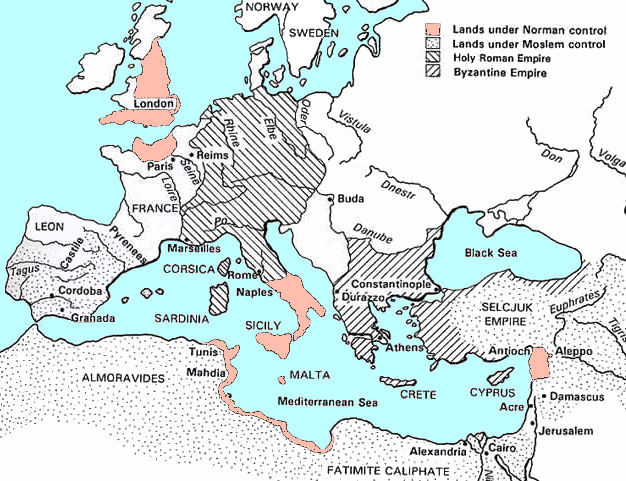 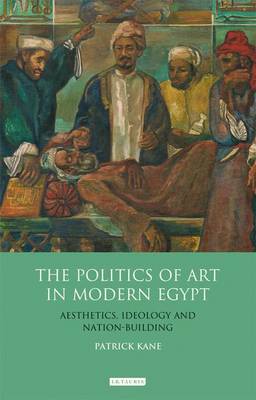